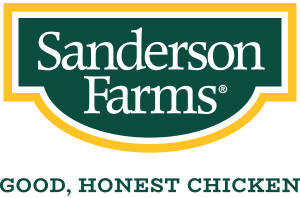 Sanderson Farms, Inc., founded in 1947, is engaged in the production, processing, marketing and distribution of fresh and frozen chicken and other prepared food items. Employing more than 18,000 employees in operations spanning five states and 17 cities, Sanderson Farms is the 3rd largest poultry producer in the United States. As a company, Sanderson Farms is committed to adopting a fresh approach in everything they do, not only where products are concerned, but companywide, as well. Though the company has grown in size, it still adheres to the same hometown values of honesty, integrity and innovation that were established when the Sanderson family founded the company.

Company shares trade publicly on NASDAQ under the symbol: SAFM.